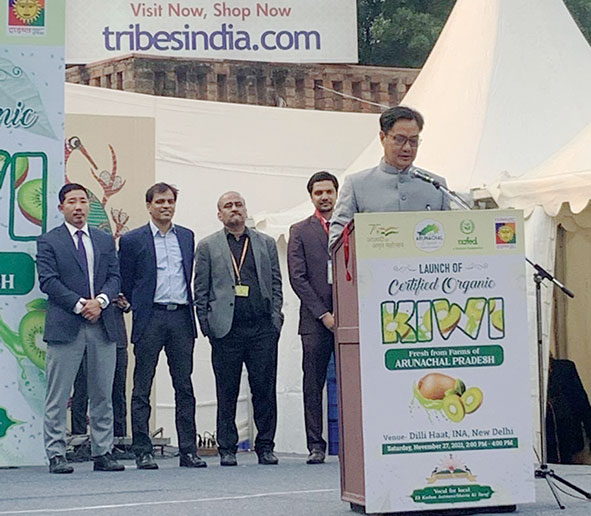 NEW DELHI, November 27: The Arunachal Pradesh Agriculture Marketing Board (APAMB) launched the state’s organic kiwifruit on Saturday in the Delhi market at a major event held at the Dilli Haat here.

Hailing the efforts of APAMB and NAFED, Minister of Law and Justice, Kiren Rijiju called the day historic because for the first time, the state-certified organic kiwifruit is launched at Dilli Haat.

He further said that “the event is a milestone and will open up the market to various other state organics.” He insisted on the organization of more events of this type, as they play an important role in the promotion, branding and marketing of agricultural and horticultural products of the state.

MoS for Agriculture and Farmer Welfare Kailash Choudhary highlighted the importance of Farmer Producers’ Organizations (OPAs) in the growth of the rural economy and the prosperity of the country’s farmers. He also highlighted various Indian government programs that can make agriculture a lucrative business for young people, including the â€œ10,000 FBO Training and Promotionâ€ program.

He said the quality of fruits and vegetables produced in the state is exceptional and can compete with produce from any part of the world.

GoAP Planning and Investment Commissioner Prashant Lokhande appreciated the collaborative efforts to create a strong perception of the positive business environment in the state to help increase trade flows in the state. . He also said that the kiwifruit is only a flagship product of the state and that in the coming days various other state products will find their way into these markets.

APAMB CEO Okit Palling informed in his speech that the kiwis were reported by the Minister of State for Agriculture and Allied Sectors, Tage Taki of the Ziro Valley of Arunachal Pradesh, who is the first in the country to obtain organic certification for kiwis. He said the state’s agricultural and horticultural products like kiwi, pineapple, ginger, turmeric and large cardamom are of the highest quality with only logistical constraints.

Among others, the event brought together the Additional Secretary of the Ministry of Agriculture, Dr PK Swain, the NAFED MD Sanjeev Chaddha and major companies in the country like Big Basket, Spencer Retail, Metro and others.

The state’s organic kiwifruit is currently available in 31 retail stores in Delhi.