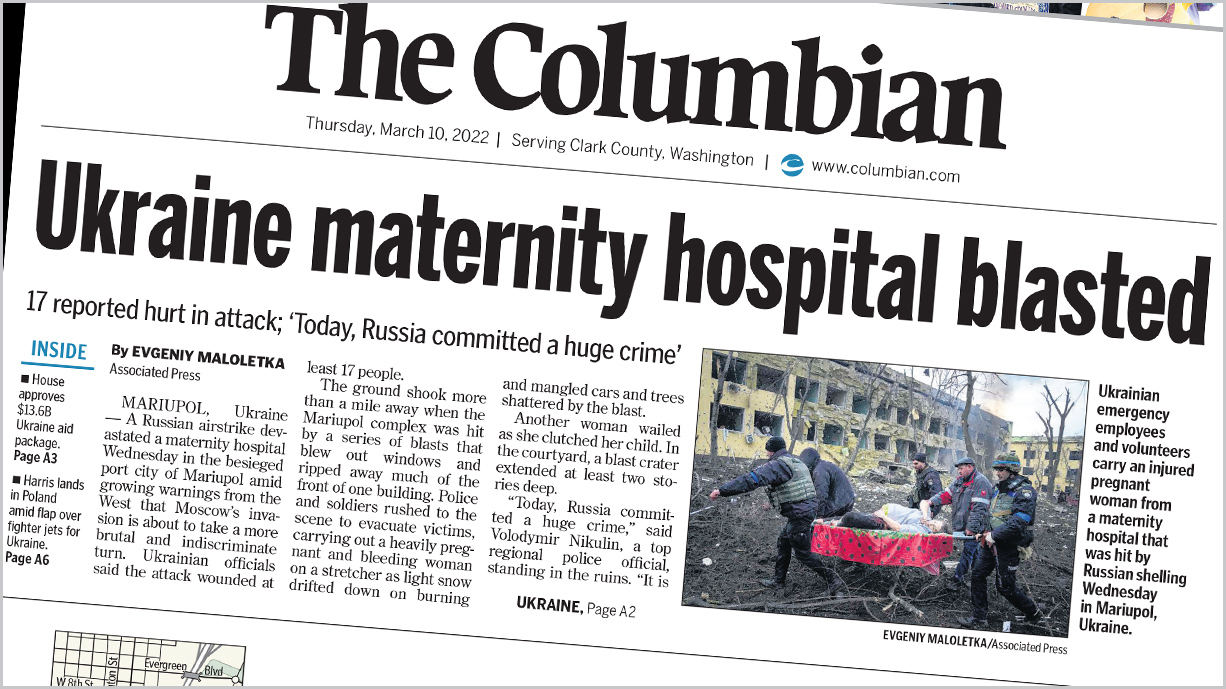 From the Newsroom: Covering the War with Wire

In my last column, I used the word “local” 12 times when trying to describe what The Columbian is.

Then the war in Ukraine broke out, and we pledged to put history on the front page every day. Several days it was the main story and/or accompanied by the main photo.

Has there been a change of heart? Why are we devoting so much space to a war that you can read in depth on other news platforms or watch on TV?

It comes down to what customers expect from mainstream newspapers. While local news remains paramount, subscribers expect to see a general news report of the day, as well as sports, comics, puzzles and weather.

We don’t have reporters and photographers in Europe, of course. But thanks to our news agencies, we can feature enough stories and photos to keep Colombian readers reasonably informed. On Thursday, for example, The Associated Press offered six war-related stories in its midday digest, and other news services also covered it.

Earlier this month, a study from Northwestern University’s Medill School of Journalism caught my eye.

This goes against the conventional wisdom that subscribers to local newspapers don’t want news from news services because they can find it elsewhere.

“Syndicated content is important for increasing engagement,” said Edward Malthouse, research director at Northwestern’s Medill Spiegel Research Center and Erastus Otis Haven Professor of Integrated Marketing Communications. “Any story is a good story if you can get me to read it.”

Some newspapers dropped their subscriptions to the Associated Press and other news services to cut costs. I don’t know what they do to cover up the war; I guess some of their readers are unhappy with the lack of coverage.

A question that inevitably arises whenever a war breaks out is “Which photos are too gruesome for the front page?” We’ve had this conversation about Ukraine before.

Like most editors, I’m hesitant to show horrible images, especially if they show harm to children. Thus, the Russian bombing of a maternity ward was the moment of a crucial conversation. Were the photos too dark, I asked during the afternoon press briefing.

Colleen Keller, our associate editor who picks the dispatches, gave what I thought was a compelling response: “I think it helps to show the real cost of this war.”

I agreed and we used the photos. I fear we will have more such conversations in the coming days. If you see these dark photos in our newspaper or on our website, you can bet we discussed the value of the news before printing it.

Keep an eye on traffic

If you were heading to Portland, or even to the river on Monday morning, you were probably stuck in a heavy traffic jam. Wreckage on the Oregon side of Interstate 5 blocked traffic to Hazel Dell and also clogged Interstate 205 more than usual. I drove back to work, but I’m sure many motorists were frustrated.

One of the best ways to “know before you go” is to visit our traffic page, www.columbian.com/traffic. You’ll find a real-time traffic map, traffic alerts, traffic Tweets (if you’re not on Twitter, it’s very useful) and traffic cameras. We recently added county cameras to our map, so you can see traffic from dozens of locations along freeways, state roads, and major county roads like Northeast 78th Street. Now if our page could only do something about gas prices.

Trading Deshaun Watson to free up $24.2 million in cap space for Texans