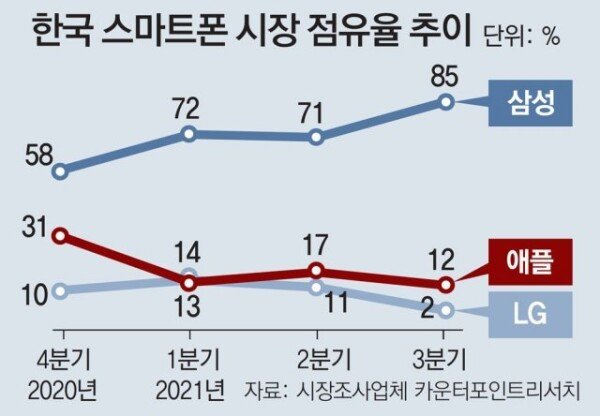 Market share of smartphones transformed after the departure of LG: The DONG-A ILBO

Since LG Electronics left the smartphone market, LG’s market share was found to be replaced by Samsung Electronics in South Korea and various Chinese companies including Xiaomi in Latin America. Motorola was in third place in the North American market.

In April, LG Electronics announced its withdrawal from the smartphone market and withdrew from the market completely by the end of July 2021. Market experts analyze that the Android block has won the competition on the market share of around 5-10% which was once occupied. by LG in South Korea, North America and Latin America, using the same operating system (OS).

Samsung and Apple have launched an aggressive promotional campaign targeting LG smartphone users by offering a trade-in program. Industry analysts say that the same operating system and the Samsung Galaxy Fold that were rolled out in concert with LG’s exit from the smartphone business are the factors that have caused Samsung’s market share to increase sharply. The Galaxy Z Flip3 and Fold3 were sold to nearly one million people worldwide in the third quarter alone, becoming the first and fourth best-selling smartphones in South Korea.