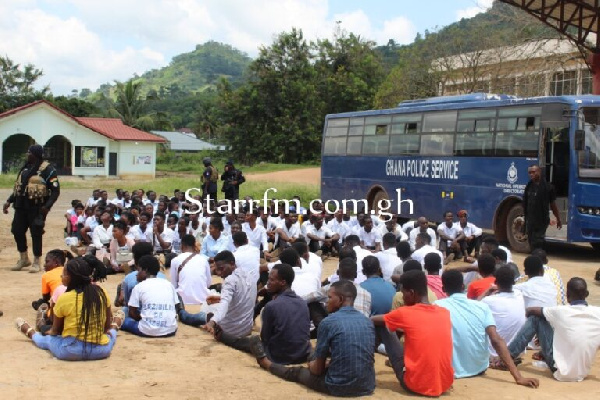 â€¢ Police incursion in Koforidua and its surroundings

â€¢ Owners of homes used by Qnet will be punished

The Ghana Police Service’s Counterterrorism Unit has arrested more than 400 people, including pregnant women and foreign nationals in and around Koforidua.

According to a report on News 360 from TV3 monitored by GhanaWeb, the police operation aimed to rid the area of â€‹â€‹a Ponzi scheme operated by Qnet.

According to the report, the company, by continuing the program, recruited hundreds of young people, some from neighboring Togo, Nigeria and CÃ´te d’Ivoire.

The victims of this scheme are lured by the promise of doubling the profits of an investment amount from 4,000 GHC, and are also enticed to recruit others who are then forced to extort money from their relatives under the same pretext.

The report states that the police intend to hand over the victims who are foreign nationals to their various embassies while the Ghanaian victims will be reunited with their families.

The police, however, intend to examine the executives of the company and sanction them if they are found guilty of a legal obligation.

Under the pretext of hosting their victims during the period of their recruitment, Qnet officials allegedly charged victims an additional 400 GHC as accommodation costs.

The recruits are then camped in rented houses scattered across Koforidua and surrounding areas.

Police, however, said they would sanction landlords who rented out their properties from Qnet managers to deter others.

Among the victims rescued by the police were pregnant women and nursing mothers.

Starrfm.com.gh in an investigative article published on March 15, 2021, made damning revelations about Qnet’s operations in the Eastern region.

In the first week of January 11, 2021, Starr News Eastern regional correspondent Kojo Ansah opened an investigation into the operations of Qnet agents in Koforidua following complaints of a possible scam.

It was quite difficult to establish the location of at least six Qnet agents operating in parts of Koforidua. They operate in rented bedroom apartments without signposts.

At Koforidua Adweso-Mile 50, an officer was found operating from a walled-up four-bedroom house. A number of well-dressed desperate unemployed young people, some in suits and ties, were found sitting in tents in the house. A few minutes later, a self-proclaimed pastor came to pray with them and delivered a motivational message.

Introduced into a room after disguising themselves as a potential customer interested in joining the network marketing company, five people including two (2) ladies were already seated in the room. They had come after an independent representative introduced them to the direct selling business.

Twenty (20) minutes later, a young man came into the room to present the business modules. He first convinced potential independent representatives of the company’s credibility by citing numerous Qnet sponsorship packages for FIFA, CAF, Manchester City, WHO, UNICEF, ECOWAS, among others.

He said worthy doctors, journalists, musicians, politicians and a few wealthy men in Ghana including Kennedy Agyapong, former President Jerry John Rawlings were in the business.

He demonstrated that an independent representative could earn an initial commission of $ 225 for the first month and up to $ 76,725 in monthly commission after four years of joining the network marketing company and advertising their products. from other clients who also refer others.

A young man who identified himself as Elvis Nelson Ayittey -Manager and Qnet Agent, explained that in order to be registered as an independent representative, the individual must purchase a form of at least Ghc100 and pay at least Ghc4.200 for purchasing a product online. and pay in addition the hostel fee of 400 Ghc.

He added that after payment, an online dollar account would be created for the individual to receive a commission payment twice a day after recommending two others to also buy a product.

â€œTo join this company, you have to buy a product first. Hope he told you about the prices. The cheapest products are the chi pendant which is 4,200 ghc and the bio-disk is 4,300 ghc. There is a way we can do this for you to secure an account, but without. get the product that pays 2,800 ghc. The company operates in 184 countries, 42 are in Africa and therefore uses a common platform. So we will create an international account for you so that you can use it to get the product. This business is a form of e-commerce, so you can do it to join any work you do. If you want to come and stay here, just add 400 Ghc to the amount to make it 4,600 GH Â¢ or 4,700 GH Â¢, â€he said.

â€œThe advertising of the product is not about the number of people you are going to advertise to. It is a form of teamwork. I started this business on April 16th of last year, things have changed in my life. I have a lot of people. I have an office in Cape Coast. Each week you will receive a commission. If you have 60 people under you, you will earn $ 5,000 per week. So try to join. so are you going to fill out the form? For the money, you can pay in installments. The forms are from GH100, “the manager said on tape.

Apparently Agent Qnet has a school attached to Network Marketing as new hires are forced to enroll in online degree and graduation courses allegedly affiliated with Quest International University. He said diplomas and degree certificates would be awarded based on the course taken.

Quest International University had not responded to the email sent on January 13, 2021 to verify the authenticity of the alleged affiliation.

In Okorase, a community near Koforidua, where another agent operated with the same modus operandi, the story was no different. More than a hundred young people were seen inside the alleged Qnet agent’s compound undergoing training after paying huge sums of money to buy a product online in the hope of being registered as as an independent representative to start earning the supposed commissions as insured.

Next stop this time around was a house where nationals from West African countries similarly operated as Qnet agents in Okorase.
They are mainly BurkinabÃ©s, Nigerians and Malians. The officers convince their victims, mostly from Mali and Burkina Faso, that they have secured them well-paying jobs in Ghana.

The victims are being asked to pay huge sums to allow them to start working. After paying the amounts, they are held hostage under the pretext of being trained to work online as independent Qnet representatives. Cell phones of victims are seized to prevent them from communicating with their families.

The victims are invited to convince two people each from their respective countries to come to Ghana under the pretext of guaranteeing them employment opportunities before they can be released. Days earlier, Koforidua police had arrested dozens of West African nationals in Bornya, a suburb of Koforidua, after one of the new victims escaped the officer’s custody.

QNET has maintained that it is a direct selling company that provides customers around the world with unique, high quality products and services while giving customers the opportunity to build a sales business by promoting the products. . Qnet sells products online to customers.

As part of its business module, the company’s independent representatives â€(IR) receive a commission of $ 250 after presenting the products to six people, placing three people to their left and three people to their right, described as two. ” legs “. When an IR introduces a new client who then becomes IR if desired, the original IR benefits (by receiving bonus points) from the success of his recruit.

These bonus points are accumulated on only one of the IR’s legs. The IR must then present the product for a new customer to purchase and also become an IR to add to the monthly commission.

More than 10,000 people working under Qnet in Ghana

On February 22 and 23, 2018, Qnet Ghana hosted its very first Absolute Living Expo attended by many stakeholders and the general public. Government agencies such as Ministry of Trade and Industry, Ministry of Enterprise Development were well represented.

Ghana’s largest trade association, the Association of Ghana Industries, was also represented at the Expo which took place at the International Conference Center in Accra.

The Chief Director of the Ministry of Enterprise Development, Mr. Joe Tackie, representing the Minister of Enterprise Development, said: â€œWe are happy to have QNET in Ghana for the long term. We are also very happy that the business module of QNET is supporting entrepreneurship. Existing for 20 years and operating in approximately 100 countries around the world, we believe Ghanaians will benefit immeasurably from the health, nutrition and business achievements that QNET brings to Ghana.

Reaction to the findings of the investigation

Qnet Ghana responded to some of the survey findings as follows.
â€œOkay, Qnet is a commercial enterprise and every business requires start-up capitalâ€¦ So of course you need capital to startâ€¦. And become a representative …. No one gets to the top alone, teamwork is the key to our business.

Regarding Quest’s international university courses offered as part of the business module, Qnet Ghana said, â€œEducation is part of our business lines if you qualify to enroll in one of our universitiesâ€¦. And start offering a course of your choice via the digital e-learning platform “

Qnet Ghana explained that â€œPeople from remote places who organize themselves by confining themselves to rooms are not part of the business modelâ€¦. But based on the understanding of a new rep, they may decide to join hands in finding a home to stay in so they can grow their business â€¦â€¦ Note: Qnet is a global business that only you have understanding that you can do business with us from any angle â€.