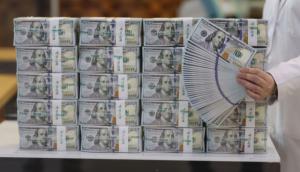 
South Korea’s foreign exchange reserves hit a record high of $469.21 billion in October last year, then began to decline and reached $438.28 billion in June this year. The June figure is below the levels recommended by the BIS and the IMF. That month, they mentioned $783.91 billion and $644.55 billion respectively as South Korea’s adequate foreign exchange reserves.

Experts say South Korea is successfully managing its foreign exchange reserves, but the problem is that the KRW-USD exchange rate is fluctuating more and more as the Fed raises rates. On August 19, the exchange rate touched 1,328.8 won per dollar, the highest since April 2009.

Short-term external borrowing is increasing rapidly as the demand for and supply of foreign exchange remain volatile. As a result, in the second quarter, South Korea’s short-term borrowing ratio rose 3.7 percentage points to a 10-year high of 41.9%.