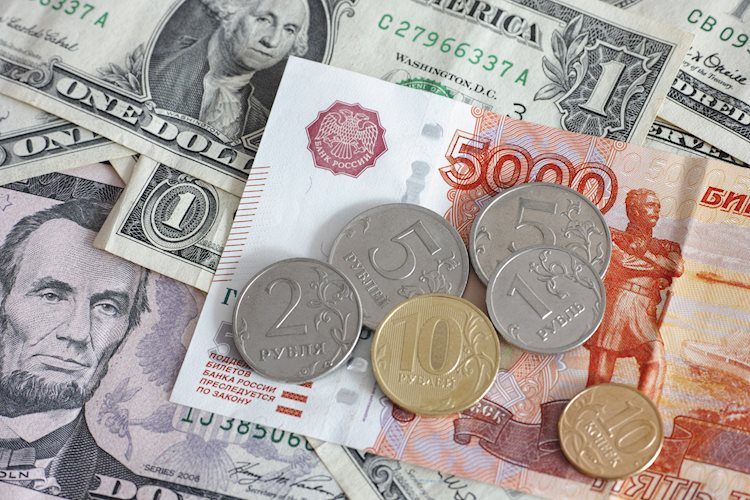 USD/RUB jumps to 78.80 and gains almost 2% on rising tensions in Eastern Europe

USD/RUB is up 1.54% during the North American session, trading at 78.81 at press time. The mood in financial markets is choppy thanks to the high tension in the Russian-Ukrainian conflict, as investors put economic news and fundamentals aside until the conflict is resolved. The former caused crude oil prices to spike, with Brent oil trading at $92.03 a barrel, while Western Texas Intermediate (WTI) is trading at $90.78 a barrel.

Updates on the Russia/Ukraine conflict

The latest developments in the Russian-Ukrainian conflict are keeping the markets uncertain. Leaders of the Donetsk and Luhansk region asked Russian President Vladimir Putin to recognize them as independent republics when a Sputnik correspondent reported “heard” artillery fire at Donetsk airport.

Meanwhile, Russian President Vladimir Putin has said Ukraine does not plan to honor the Minsk agreement. Accordingly, Putin said that Russia should consider recognizing the independence of these two eastern Ukrainian regions.

Analysts suggest that any acknowledgment of the latter could also undermine prospects for peace talks between Russian and US officials, to be held on February 24 in Geneva, when Russian Foreign Minister Lavrov said he planned to meet with US Secretary of State Blinken.

It should be noted that Russian banks imported USD 5 billion of foreign currency in December, as this anticipates a possible increase in demand for non-RUB notes.

Therefore, if a resolution cannot be reached, it would be a headwind for the RUB. In addition, the sanctions imposed on Russia could trigger a significant depreciation of the RUB against the dollar, pushing the USD/RUB exchange rate towards the highs of January 2016 at 85.98.

USD/RUB has rebounded 6.44% in the past three days, threatening to hit a year-to-date high of 80.41. Also, the weekly moving averages (WMA) are well below the exchange rate, in a bullish order, with the shorter timeframes above the longer ones.