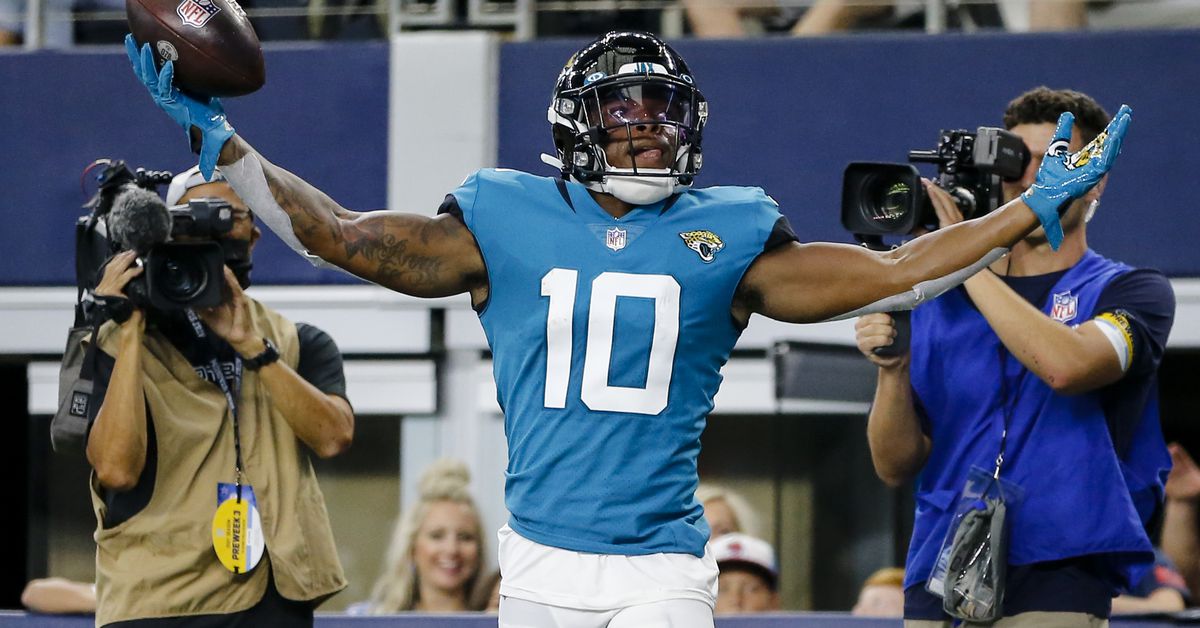 After apparently signing wide receivers Christian Kirk and Zay Jones to surprisingly monster deals in free agency, rumors began swirling Laviska Shenault was supposed to be put on the trade block by the Jacksonville Jaguars.

For a team like the Dallas Cowboys, who still need more receiver help after trading Amari Cooper and losing Cedrick Wilson, a unique player like Shenault really should be considered if he’s on the trade block.

Shenault, the Jacksonville Jaguars’ second-round pick (42nd overall) in the 2020 NFL Draft, is a big, strong wide receiver with a unique skill set reminiscent of that of Deebo Samuel of the San Francisco 49ers. He doesn’t have Samuel’s breakaway speed, but like the 49er superstar, it’s extremely difficult to plan a game because he can line up just about anywhere on offense.

As far as the Dallas Cowboys go, Shenault would be a great WR3 option behind CeeDee Lamb and Michael Gallup. He could fill the role played by Cedrick Wilson in 2021 during Gallup’s injury and arguably be an upgrade. He has the same kind of versatility to play inside or outside and is even more dangerous after the reception.

If added to the Cowboys WR room, Shenault should also see more favorable matchups in the passing game than he did during his time in Jacksonville. With the Jaguars, he was often treated as their best receiving threat, drawing their best cover man. In Dallas, that won’t be the case with CeeDee Lamb and Michael Gallup getting that attention.

He’s a player that Kellen Moore can get really creative with. In a sort of copycat league, teams are looking for players who can do the same kinds of things Deebo Samuel did with the 49ers last year. Shenault may be a poor version, but he has the same kind of skills as a runner or a catcher, despite never really being used regularly in that type of role.

As an added bonus, Shenault is also a born-and-raised Texan (Irving, Texas). As such, he participated in “Dallas Day” which is held for local prospects who grew up or attended school in the Dallas area prior to the 2020 NFL Draft. Because of this, the Cowboys should already be quite familiar with him and what he would bring to the table.

All in all, trading for Shenault would free up the Cowboys even further in the 2022 NFL Draft. As things stand, even with CeeDee Lamb and Michael Gallup in the fold, WR still remains an underrated need. Adding Shenault would be a low-risk move on their part to add more depth and shouldn’t cost them more than a late Day 3 pick.

FTX and AZA Finance will advance the Web3 economy in Africa